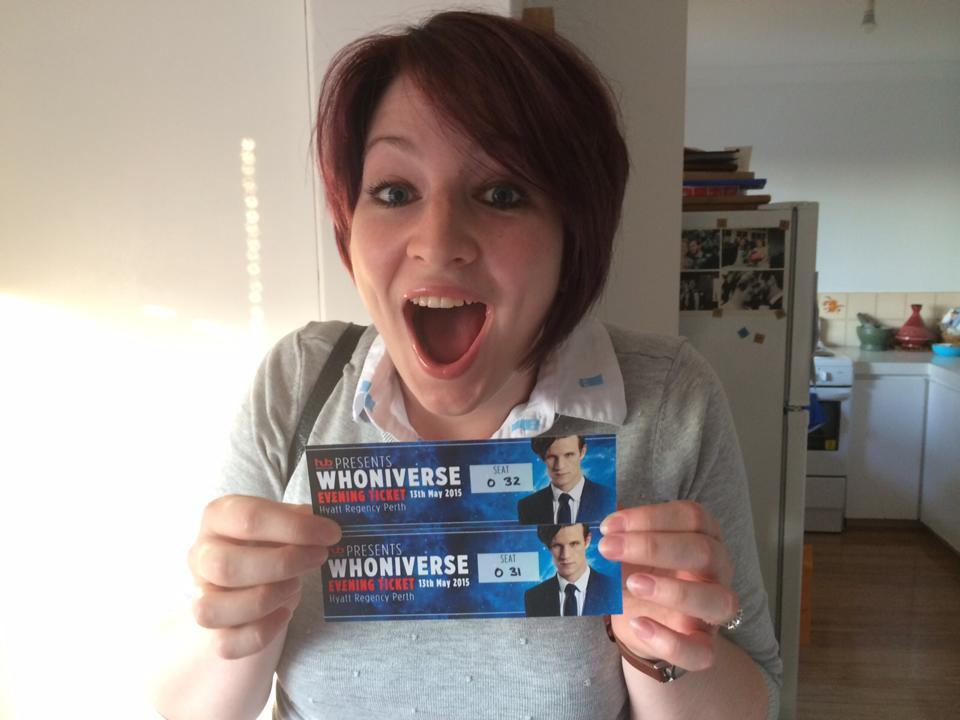 No one was more surprised than me when I became a Doctor Who fan. I’m probably the only person with a chemistry degree who doesn’t love space or science fiction, and I generally try to avoid shows that are remotely ‘wacky’. But there was something about the travels of the Doctor and his companions that got me hooked. Perhaps it was the quaint Britishness of it all? Perhaps there were enough episodes set in the past to make up for the aliens? Or perhaps it was because life as a final year medical student was so overwhelming that I could have become addicted to anything? Either way, it took me only three months to go from knowing nothing about the show to having watched the entire reboot (Torchwood included), and having a ticket to ‘Whoniverse’, a fan event where I could meet Matt Smith (the Eleventh Doctor), Alex Kingston (River Song) and Freema Agyeman (Martha Jones).

I had no idea what to expect of a fan event. Would everyone be dressed up? Would it be super nerdy? Would I stand out as a fraud for being such a new fan? What if the cast members weren’t as delightful in real life as they were in the show? In the weeks leading up to the event, I tried not to focus on these questions and instead submitted to the excitement and novelty of it all.

When ‘the day of the doctor’ arrived and my husband and I approached the venue, it was easy to spot where to go. Snaking its way towards the entrance was a line dotted with bowties and fezzes, the trademark accessories of the Eleventh Doctor. Nearly everyone had a Doctor t-shirt or jumper on, and some were indeed in full costume. But what struck me more than the accessories was the diverse array of people. No wonder the show recently celebrated its fifty-year anniversary: how many shows are loved by as many generations as this one?

We began our evening by handing over more than a day’s pay for a photo, and after two hours of fidgeting and watching old episodes it was finally our turn. Standing in line, I noticed a young woman behind me wearing the whole shebang: t-shirt, bow tie, fez, Tom Baker scarf and sonic screwdriver. I gave her a quick smile, which she responded to by yanking my bag off my shoulder and placing it on the ground.

‘You won’t want your bag in the photo’.

I nodded vaguely. At this point we were so close to the stars that my mind had started to go haywire, rendering any other response impossible.

Noticing my distraction, the woman looked me straight in the eyes and began to speak as a coach would to a new recruit.

‘I know you’re brain is feeling mushy, so take a deep breath and pay attention. You’ll want to remember this forever.’

This girl was a pro, a pro who had done this many times before. I thanked her for her unsolicited advice, but she wasn’t finished. Looking me up and down, she finally realised what was most wrong with me.

‘Where are your PROPS!?’

Before I could explain that I’m definitely not a props kind of person, my husband and I were whisked behind a screen. If my mind had been haywire before, that was nothing compared to what it was then: Matt, Alex and Freema, not on my tele but there in real life!

I’d like to think as an ex-scientist / doctor I have become a rational person. However, at times like these, even when I remind myself that famous people are ‘just people’, rationality leaves me. Over the years I have tried to analyse why this happens, and all I can put it down to is love. It’s only when I care that I lose the plot, automatically reverting to one of two behaviours: gushing away embarrassingly like some stalker fan girl or, worse, freezing up and not saying anything at all. Fortunately for me, the event organisers left me with no time for either behaviour to establish itself.

‘Hello’ I managed to squeak excitedly, and the actors were delightful back. Then we were shuffled into line, snapped and ushered back out again, all in the space of about ten seconds.

In our photo my husband and I look deranged with excitement, and my hair is disheveled from nervous fiddling. But we love it anyway, and it has pride of place on our fridge. Every time I look at it I’m so glad that I was reminded to breathe and pay attention, because even though the moment was brief, it is definitely something I want to remember forever.