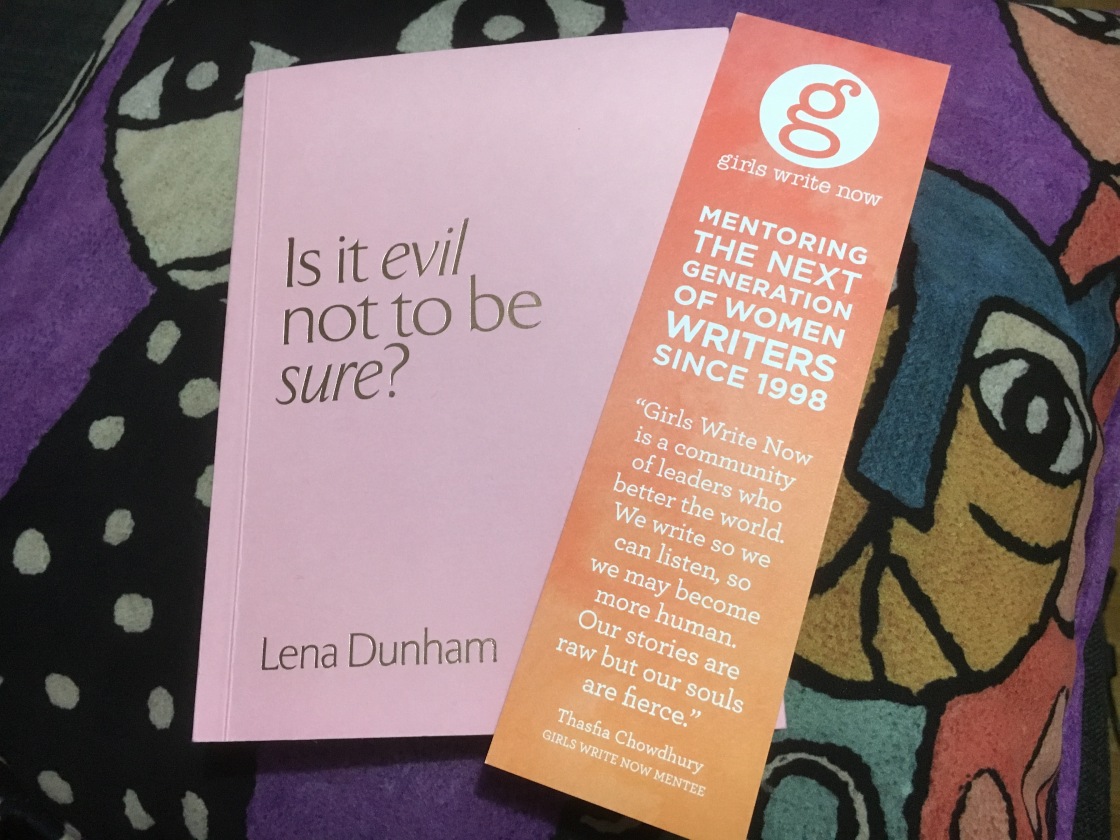 ‘Is It Evil Not To Be Sure?’ My Thoughts On Lena Dunham’s New Book

The 17th of May was a pretty exciting day for me. I was having an interesting time at the RACP Congress in Adelaide, and I had just discovered Andre’s Cucina and Polenta Bar (a whole restaurant dedicated to polenta- amazing!). Then, to top it off, this happened….

So was waiting up until 1:30 am and spending a small fortune on fifty-five pages of Lena Dunham’s teenage diary worth it?

Here are three reasons why:

One: it’s for a great cause.

All profits from Is It Evil Not To Be Sure have been donated to Girls Write Now, a New York-based initiative that helps marginalised young women develop confidence and skills through writing mentorships, workshops and assistance with college preparation. Given that thirty percent of New York City high school students fail to graduate on time (a shocking statistic despite this being a record low for the city), and considering the massive educational inequalities and gender disparities that still prevail, the programs offered by Girls Write Now are beyond important.

Two: it made for interesting reading.

To many, perusing the diary of a nineteen year old Sophomore may sound as enjoyable as grating one’s leg off with a cheese grater. However, Dunham’s ‘Creative Snippets and Observations Journal’ from 2005 is always engaging and often insightful. Rather than sticking to the traditional journal format, Is It Evil Not To Be Sure reads more like a Twitter feed dedicated to witty quips on life, relationships and sexuality. Winning observations include:

My mom called to ask when we would get to have some quality time together. I realised she was calling from downstairs.

A boy shared his umbrella with me and I got his name wrong and I loved being able to feel powerful in those two ways.

Is it wrong to do things just to write them down?

And, one that rings particularly true of late…

I’m so tired lately that I look dirty all the time.

To be honest though, even if consensus was that the journal was a pile of drivel I still would have no regrets about my purchase. In my opinion, when it comes to writing Lena Dunham can do no wrong (it’s a rare occasion when we don’t see eye to eye, and she is always entertaining).

Three: I now own a limited edition book with Lena Dunham’s signature in it.

For any Lena Dunham fans out there that missed out on a hardcopy, Is It Evil Not To Be Sure can now be purchased as an ebook. An excerpt can also be read here.